Spending my teen years in San Jose, CA in the 80s, I was anxious to start a hardcore band. The only problem was I only had a small handful of friends who were into it like I was.  And none of us played any instruments. Or at least, we didn't play them well. On top of that, I didn't have a car or a driver's license, so I was pretty much stuck in my little suburban island, waiting for relief to arrive.

One day, some younger dudes from my high school started a punk band called THE LEGION OF DOOM. They played Buzzcocks covers, and wrote some of their own tunes, which were along the lines of Posh Boy type SoCal punk, but without the melody.  Eventually, their singer quit. With me being a self-promoting loudmouth, not to mention the only guy in school who walked around with a homemade anti-Reagan T-shirt, I ended up in the band. 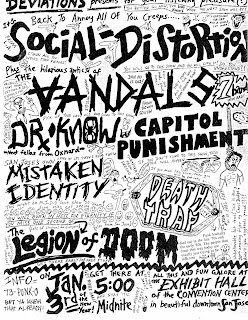 I liked their old songs, but they insisted on writing new ones that were slightly more metal. They were drifting towards mainstream rock, right at the time I was hoping to make an impact with a decent hardcore punk band.  We played a few really good shows... not that we were necessarily "really good", but the line-ups were, and I was excited to brag about how we played with those other bands.  The other guys didn't share my enthusiasm.  They wanted me to take voice lessons so we could "go metal".  I wanted them to play shorter and faster, so I could scream.  Alas, my teenage dream of becoming a hardcore superstar was not in the cards. 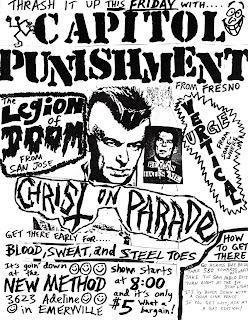 We went into the studio to record twice, we were included on two compilations, but our imprint on the local punk scene was non-existent.  If anyone remembers us, it's because they confused our band with the much more prolific Boom And The Legion Of Doom from Michigan (ironically, years later I ended up becoming good friends with Bill Board aka Smelly aka Jeff from B&TLOD when he moved to California).

Here's a copy of our rehearsal demo from 1985.  We re-recorded all of these songs on our actual studio demo, but the rawness of this garage recording is more suitable to how the band actually sounded.