I'm sure you were just sitting at home thinking, "I really need to hear a couple rare STIKKY tracks, but only if the quality is shitty."  Well, this is your lucky day, my friend. 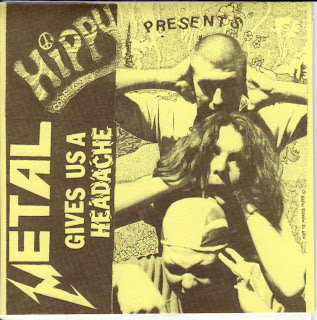 First up is our song from the Hippycore compilation 7" "Metal Gives Us A Headache".  Our track is "I Want To Hear Horns".  The song title was a quote by Joel Wing, former bass player from Corrupted Morals, who was one of the founding members of Dance Hall Crashers.  Like many of our comrades from the East Bay / Gilman scene, with the rise of Operation Ivy, he transitioned from a hardcore kid into a ska punk kid. Hence, his proclamation one evening, "I want to hear horns!"  So silly we had to use it.  Speaking of silly, on this tune we integrated hardcore with a Barry Manilow song, and then ended with a Virulence tribute (which was cut short on the record). This track was recorded at Chris & Todd Wilder's house, in Todd's bedroom where we always practiced.  It was recorded on 4-track by Steve Von Till, or local pal from Transgressor who eventually joined Neurosis and lived up to his true Nordic potential (I mean the guy served a roasted pig and mead at his first wedding). That's Wayne Vanderkuil, Jack Kahn (Hippycore, Desecration) and Jeff Bowers (Last Option) on the cover of the comp.  Probably 1988.  4-track recording, on poorly mastered vinyl, and now transferred to MP3 via a super cheap Ion Duo Deck. Sounds like crap. One day I'll find the original cassette and put that up on this site instead.  I believe we recorded an extra song in that same session... a Criminal Class song called "Blood On The Streets", one of our joke skinhead anthems.  I'll post that sometime as well, if I ever find it.
STIKKY - "I Want To Hear Horns" 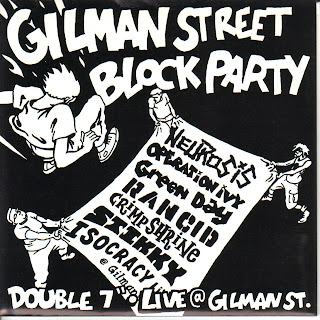 Next up on the shit parade is from the only time anyone ever bothered to bootleg a STIKKY song.  We were fans of nearly every hardcore band, and we often played covers on the spot.  We were big fans of CLOWN ALLEY and often ran into vocalist Dave Duran at Gilman.  One night we told him we wanted to play the Clown Alley song "On The Way Up" if he sang it.  He agreed.  We did it.  He got completely lost.  It was a minor trainwreck.  Somehow this recording ended up on a Gilman compilation bootleg double 7" called "Gilman Street Block Party".  On the back cover, the bootleg was justified as a supposed benefit for East Bay Armed Response, whatever that made-up charity was.  So, here's a poorly EQ-ed soundboard recording, ripped from vinyl on the same crummy Ion Duo Deck.  Enjoy!
STIKKY - "On The Way Up"