During my pre-teen and teenage years, Maximum RockNRoll was my bible. In those pre-internet years, MRR was one of the only resources to connect to the worldwide hardcore punk community.  I sent contributions to the mag throughout the '80s... letters, San Jose scene reports, lame interviews with local bands.  Some were published, some were not (thankfully).
When I moved to San Francisco from San Jose in 1988, I became a regular "Shitworker" at MRR, editing, creating cut 'n' paste layouts, and writing a lot more. And I was the only one who liked the more extreme tunes, so by default I got all of the good records for review.
Also based out of the MRR House in SF was their radio show.  Early on, they broadcasted live weekly from KPFK in Berkeley.  Eventually, it migrated to the house.  It was recorded on cassette with two turntables, two mics, and a mixer.  We were surrounded by Tim Yo's record library, but the focus of the show was typically new releases.  Anyone who wanted to host a radio show was welcome to, so I tried my hand at it a few times.
This is a copy of a new release hour I emceed on 9/15/91.  I had recently released the first 7" by CAPITALIST CASUALTIES, "The Art Of Ballistics" on Slap A Ham, so naturally it got a few plugs.
Here it is in all its glory, recorded in the basement of the old MRR house at Clipper & Diamond streets. Marvel at my deadpan hosting skills, while DJ Last Will spins the turntables, including the occasional record starting at the wrong speed, and the fader being left down during Splatterreah.  Punk rock. 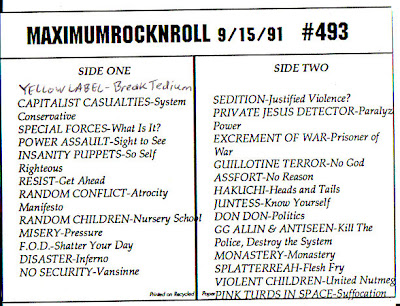