Dave Witte was always one of my favorite drummers.  He's one of the rare players who "gets it", who understands that brutality still needs a groove, for lack of a better word.  His blast beats were not only executed with precision, but also with style.  And thus, I spent the better part of the '90s wishing I could be in a band with this guy.  The problem is we lived 3,000 miles apart.

I used to record a lot at home on my Tascam 8-channel cassette recorder.  Whenever I recorded, I always started with the drum track, then I'd build the guitars on top of it.  After realizing neither Dave nor I would be in the same room long enough to write songs together, let alone record, I came up with the idea of a East Coast / West Coast long-distance collab via the postal service.  We would approach it the same way... without any lead from me, Dave would go in the studio and record drum tracks, based solely on improvisation.  Then he would send me the drums and I'd add my parts to whatever it is he came up with.  These days with easy home recording & file sharing access, this isn't a big deal, but at the time it was a semi mind-blowing concept.  No really.  You need to put it in the context of the time, around 1999. People flipped out when I told them how we were doing this album.  I'm sure similar efforts existed in the past, but in our scene, it was something largely unheard of.

Dave recorded drums to 16-track 2" tape back in New Jersey, then he sent the reel to me in San Francisco, and I recorded guitars, bass, noise, and vocals in Oakland with Bart Thurber.  This was a time in my life when I was trying to branch out and figure out what my "next thing" was going to be.  I still loved hardcore, but I was searching for something to push the boundaries. In listening to this album, it's clear I was incorporating a good share of Agata / Melt-Banana worship into these tracks.  This album was in the can in 2000 and was released on my own Slap A Ham label, on CD-only, because people had stopped buying vinyl at that point (and very soon after, stopped buying CDs as well). 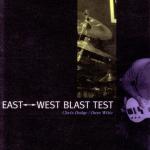 The name of our project was actually NOT East West Blast Test.  I released this album under our names.  It was actually a CHRIS DODGE / DAVE WITTE album, and the name of the album was "East West Blast Test".  It wasn't meant to be egotistical... I was actually doing for a new angle in hardcore, inspired by my favorite jazz releases.  At the time, I was listening to a ton of early '60s releases on the legendary Blue Note label, and all of these albums were released under the names of the players, not a band name, per se.  And if you look at our album art, it was also intended as a tribute to those Rudy Van Gelder era Blue Note releases: 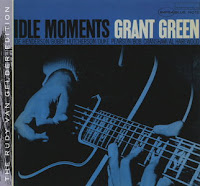 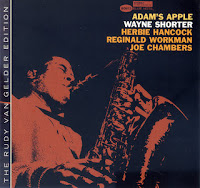 Overall, did we succeed?  Not really, but it was a valiant effort.  It's a short album, maybe too short.  It's an album that could have used a little something extra.  We experimented, but after it was completed I knew I hadn't pushed far enough.  Any shortcomings about this album can be attributed to me 100%.  Despite that, some people really liked it.
This album was re-released a few years later by Relapse, with slightly updated artwork, and at that point we agreed to properly name our project EAST WEST BLAST TEST.  We maintained the Blue Note art vibe, a bit more successfully this time. 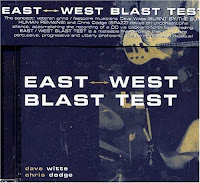 Several years later, we released a second album on the Ipecac label.  It's much more varied than the first, but also arguably a lot less focused, and somewhat random.  Not a success by any means, in fact most fans of the first album didn't even know the 2nd album existed.  It was written and recorded during a very odd and turbulent point in my life, which was both exciting and soul-crushing.  More about that another time.

The first album is still in print via Relapse, so out of respect I'm not posting it for now.  But before I went to record my guitars in the studio, I made a cassette of Dave's drums and fleshed out some demos on my trusty Tascam at home.  Here are 4 songs from the home recordings, heard by no one but Dave and myself until now:
EAST WEST BLAST TEST - home demos (2000) 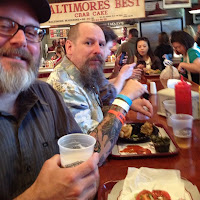