As mentioned in my EAST WEST BLAST TEST posting below, around the turn of the Millennium, I was trying to figure out "what's next".  Aside from my allegiance to hardcore, I listened to a bit of everything, but was intrigued by noise.  As a kid, I used to make strange cut-and-paste cassettes of odd samples from various records and spontaneous moments taken from the radio.  Little did I know until many, many years later that people have been doing such things for 50-60 years plus, and actually had fans!

In the 90's, Eric Wood used Man Is The Bastard as a vehicle to broaden the scope of extreme music, by merging violent instruments and vocals with searing electronics. A unique combination that has since inspired untold legions of musicians and noisemakers alike.  Wood and I had been friends since about 1988, and aside from my occasional guest vocals with MITB, we had never collaborated musically. 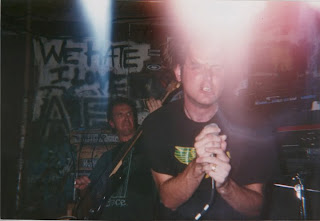 In 1999 I finally got off my ass and figured out how to create some decent noise tracks, something other than simply looping distortion and delay pedals.  Out of this exploration, JESUS PHILBIN was born.  I released the "Subterranean Electronic Blasphemy" album on Jon Kortland's (Iron Lung / Gob / Pig Heart Transplant / Dead Language) label Satan's Pimp.  After that followed a handful of smaller releases. But I'd never performed live, doing the noise thing.

In 2001, I moved from San Francisco to Los Angeles and after spending many hours with Mr. Wood, a collaboration was eminent. MITB had broken up, and BASTARD NOISE was going strong with a stripped down line up of only Eric Wood and John Wiese.  After much discussion (and ultimately a show invite from Enterruption), Wood, Wiese, and I ended up collaborating live... strangely enough back up in San Francisco.  I returned to SF a year after moving.  I had worked so hard to escape The City in 2001, and finally had the mental wherewithal to return.  The former dotcom douchebag-generating conveyor belt had finally ceased operation, and many parts of SF looked like a ghost town.  A "new economy" based solely on greed had finally collapsed, leaving a swath of vacant storefronts and a lack of culture in its path.  The perfect setting for an electronic onslaught. 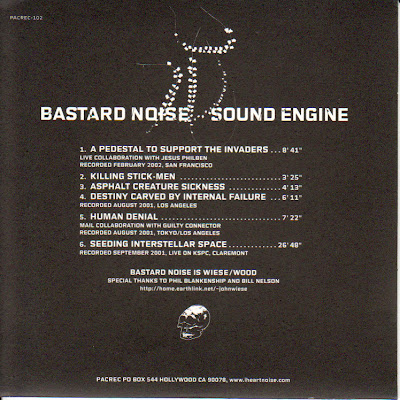 This is the only recording of BASTARD NOISE and JESUS PHILBIN, Wiese / Wood / Dodge.  It was released many years ago as the first track on the long out of print Bastard Noise "Sound Engine" CD.