Turns out today is the one year anniversary of Tony Sly's passing.  Tony is best known as the frontman for No Use For A Name. He was always an awesome guy.  I don't think I ever had a disagreement with him.  Always very even-tempered, mellow, reasonable, likeable, and I always felt like we were on the same page... overall, just a good friggin' guy.

As mentioned in prior writings, I was in and out of NUFAN no fewer than 3 times.  The third and final time I was on 2nd guitar.  At that point, I was establishing an identity in extreme music (in other words, everything NUFAN was not) through my reviews of all noisecore, grind, thrash, hardcore, and power violence releases in Maximum RockNRoll, and also through my label, Slap A Ham Records.  So, what was I doing in this melodic punk band?  First off, I was itching to play, since STIKKY no longer played, but I couldn't find anyone in the SF Bay Area to start a pissed-off hardcore band with.  It just wasn't "cool".  Secondly, with the ever-revolving door of NUFAN members, I tended to be the default guy they'd call when someone else quit. I was childhood friends with the NUFAN guys and had co-founded the band with Steve & Rory.  So, me & my tacky yellow BC Rich made the rounds with No Use yet again in the early 90's.

At that point, Tony was starting to tap into what would eventually become the NUFAN sound. It wasn't fully there, but in retrospect you could tell it was starting to formulate, especially in comparison with the earlier releases.  Steve was taking classes at a place in the South Bay somewhere called the College For Recording Arts.  The recording students needed a band to experiment on, so we went in for a couple hours & recorded one of our newest songs, "Hole".  Still a pretty good track, which ended up being re-recorded for the "Don't Miss The Train" album.  Tony wrote it, and was clearly showing some Bad Religion thesaurus-core sensibilities.  I remember we sort of gave him a hard time about using the word "mendaciously" in a song. Although I'm willing to bet money this is the only song in recorded history with "mendaciously" in the lyrics, so that's saying something right there. 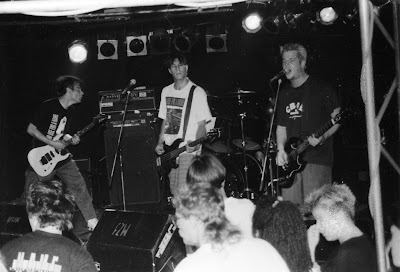 Anyhow, for those of you who are die-hard NU-fans, here's that extremely rare demo track.

Cheers to the memory of Tony, and much love to the Sly family!