Noise.  That's what this post is all about.  Noise in the literal sense.  Random, free-form electronic sounds.  Some people dig it, most people don't.  "Noise is the new punk", said my pal Eric Wood.  Well said.

Ever since I was in elementary school, years before I had any idea what "noise" was, I used to create weird, cut 'n' paste, sound collages on cassette, mostly consisting of random segments from different records, and between-station sounds on the radio.  Years later, it turns out there has been a scene of noise dating back who knows how long (I've heard experimental recordings that date back to the 1940's).
One of my first "official" noise releases was the JESUS PHILBIN "Subterranean Electronic Blasphemy" CD, released on Jon Kortland's (IRON LUNG, GOB, PIG HEART TRANSPLANT) label Satan's Pimp back in 2000. Maybe I'll post that one here someday.

In 2006, I got together with my friends Kevin Fetus (TO THE POINT, FETUS EATERS, WATCH ME BURN) and Jay Howard (CIRCUIT WOUND, WIRE WEREWOLVES) at Fetus' apartment.  We all brought some gear, hooked it up to Jay's mixer, and recorded several hours of sound exploration. After hours of debate via email, we agreed that our collaboration would be named BACTERIA CULT. 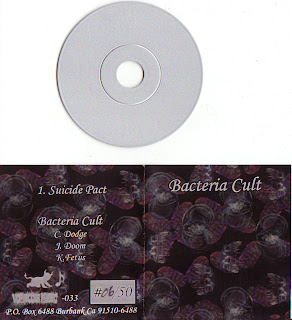 This initial BACTERIA CULT session resulted in a 3-part series of 3" CDRs released on Fetus' own Vomitcore label. This is one of those rare CDRs... a 23 minute piece entitled "Suicide Pact".  Hand numbered & limited to 50 copies.  All CDRs were spray painted silver by Fetus himself.

Since this initial recording, we've added Eddie Nervo (+DOG+, DESTROY DATE, FINAL SOLUTION) to our personnel. BACTERIA CULT still performs live, usually once a year when a cool, touring noise unit comes to Los Angeles. Watching us live is a cure for insomnia, but I'm quite proud of the sounds we produce.
We have a decent discography of releases under our belt, and I'm betting 999 out of 1,000 readers of this blog have never even seen them. 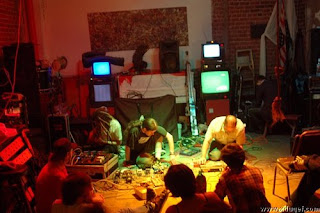 If you're willing to step out of your comfort zone for 23 minutes, this may be a good starting point.