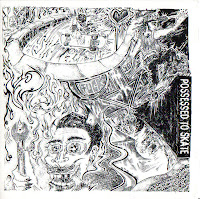 Long out of print, and not reissued on any of the three "Sweatin' To The Oldies" volumes (*Post Script: actually they were, but that collection is out of print as well), here are the SPAZZ tracks.

As a bonus, you get the equally as hard to find DESPISE YOU tracks from the comp.  I played with DESPISE YOU many years after this comp was released.  I'm not on these tracks, but I checked with Elder and he gave the OK to post these tunes as well.

Possessed To Skate - SPAZZ / DESPISE YOU
Posted by Chris Dodge at 11:41 PM