In 1986, I was doing vocals for a skate punk band called THE LEGION OF DOOM, comprised of guys from my high school.  I was always pushing my bandmates to play faster, and be more hardcore.  After a couple years, they were now getting over their "punk phase", and wanted to "turn metal".  I saw the writing on the wall, and clearly LEGION OF DOOM was not going to become the hardcore juggernaut that I envisioned.
Around this same time, I discovered a demo from a local band called STIKKY.  I bought the demo from Sessions skate shop in Sunnyvale.  Turns out STIKKY guitarist Chris Wilder was previously in another local band I really liked called ARSENAL, where he played a bass guitar that he built himself, which was shaped like a machine gun.  I remember seeing ARSENAL open a huge show (can't remember, maybe it was Agent Orange?) at the San Jose Convention Center, where they played a thrash version of the "Sesame Street" theme song.  It being my teen years, this was comedy gold.
I don't remember how, but I ended up being STIKKY's roadie and biggest fan. They were doing exactly what I wanted to do... they were playing every song fast.  Drummer/vocalist Todd Wilder was one of the most talented & unique hardcore drummers around, and no one realized it (and still don't).  He had a trademark method of rolling his kick pedal, basically making his single kick sound like a double kick.
I hung out at all of the practices, and eventually The Wilder Bros, myself, and Big Wayne became a close knit group who spent nearly every day listening to hardcore, going to shows, and mostly hanging out and acting like dorks. In early 1987, bassist Jamie Porter stopped showing up for practice.  Not sure why he was flaking, but he seemed to be getting bored with it all.  The Wilder Bros called me up and said "If Jamie doesn't show up today, you're going to be our new bass player."  Jamie didn't show up; I was in the band.  I actually didn't own a bass or an amp, so I borrowed this enormous Gibson from Big Wayne.  It was awkward for playing hardcore, and it weighed a freakin' ton. Within a month or so, I found a good fit with a cheap Peavey bass, which in retrospect was a piece of crap, but I loved it at the time.
In April 1987, I played my first show with STIKKY:  At Gilman with MDC and Gang Green. The opening band was Operation Ivy (it was Op Ivy's first club show... their actual first show was in Dave Mello's garage, I saw them there as well).  Either that evening or the next time we played, Tim Yohannan hit us up to contribute to an upcoming Maximum RockNRoll compilation.  I felt like I'd hit the big time.  MRR zine was my monthly bible, and the "Welcome To 1984" MRR comp LP was one of my all-time favorite records. And now Tim Yo was hitting up one of MY bands!  I couldn't believe it. 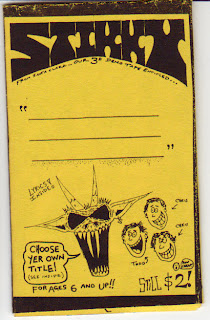 By June 1987, STIKKY had written several new songs & it was time to record Demo #3. Our friend Fred Sablan recorded it on his 4-track in his garage. Many years later, around 2006, I played a one-off show with Fred at the Knitting Factory for his project Birthday Twin. There were about 15 people there. If you look up Fred these days, he's playing bass for some skinny goth dude named Marilyn Manson.
Anyhow, STIKKY Demo #3 was the "Choose your own title" demo. 11 songs of that patented, sing-songy hardcore mayhem.  As I mentioned in an earlier post, Todd Wilder is one of the earliest, unsung drummers to play a blast beat before it even had a name.  It was just his way of figuring out how to play even faster than he already did.  Listen to "Pollution Rules", "Russia Nuked Themselves", or the end of "Don't Look Now", and you'll hear what I'm talking about. Maybe it's not "fast" by today's standards, but keep in mind this was 1987... many, many years before there was a grindcore band loitering on every street corner.
In addition to the standard demo, I've included the demo recording of "Moshometer" which was never released.  We recorded this the same day as the demo, and gave it to Tim Yo for the compilation.  Instead of using our thin, 4-track recording, MRR decided to spring for studio time, so this first version of "Moshometer" was scrapped. Later in the summer we re-recorded "Moshometer" and another track for the "Turn It Around" 2x7" comp.