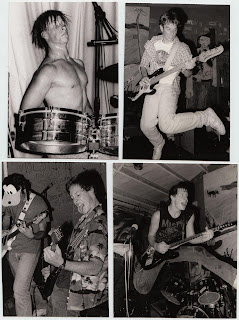 A lot of folks have hit me up for copies of the STIKKY demos.  I keep meaning to capture them as files, but I'm too busy drinking fancy craft beer and watching "Murder She Wrote".  Luckily my pal Robert Collins who runs the awesome tape blog TERMINAL ESCAPE has already created a download for 3 of the 4 STIKKY demo tapes, and a few rehearsal tracks are included to round it out to an even 90 min.  The only thing missing in the link below is Demo #3.  Demo #3 1/2, which is included here, is actually our 4th demo.

Prepare for an onslaught of total dork thrash...