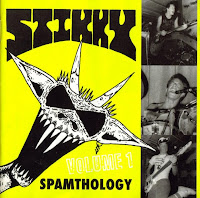 STIKKY - Spamthology Vol. 1.
No, there is no Vol. 2.
Released on Sound Pollution around 1997.
This release collects the rough mix of the "Where's My Lunchpail?" album, and both 7" releases, "Cuddle" and "I & I & That Guy Over There", plus a couple oddball outtakes.
The original Lunchpail album had a horrible mix, and an even worse mastering job.  This version of the album was taken from a rough mix cassette that sounds better, plus it has all of our rambling between songs... when we recorded the vocals we did everything live, meaning we just let the tape roll and recorded each song consecutively.  Aside from one or two stops, for the most part, it was all recorded in one long take. 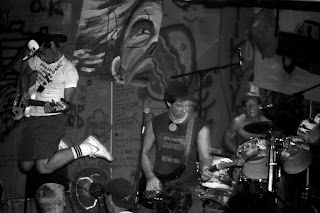 In my opinion, STIKKY drummer Todd Wilder was one of the very first (and unrecognized) drummers to EVER play a blast beat.  Listen to "Pollution Rules" and "Boy, Do Girls Ever Suck". These were recorded in 1988, but written in 1987. Prior to this (and not included on this collection) was the comp track "Russia Nuked Themselves", written and recorded in 1986, definitely the first STIKKY blast beat, and for sure one of the earliest recorded.  Yes, I know about Repulsion around the same time.  I said "ONE of the earliest" you Numb Nut!